Performers Of The Year – 2022 Results 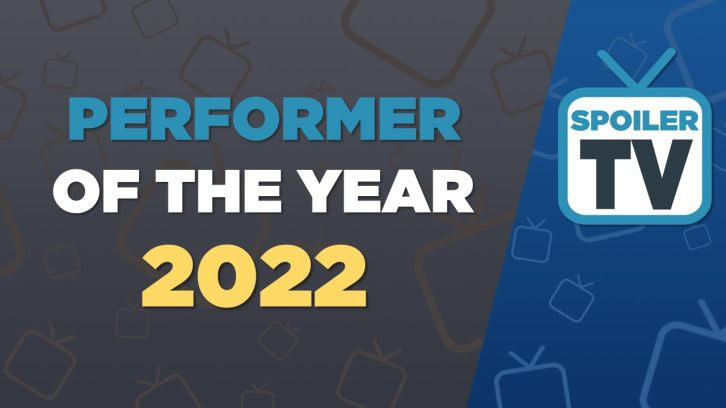 Below you will find the Top 3 finishers for each side listed out in placement order. All of these graphics will be available on my Twitter account as well as the official SpoilerTV Twitter and Instagram accounts. We are happy for you to share them, but please share them from one of these official sources to ensure you are sharing the best quality version of these graphics. For the highest quality, please click on the slides to enlarge them. 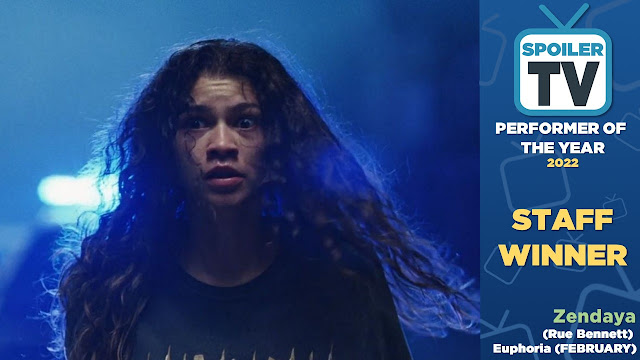 As with all rounds of POTY this proved to be a fun battle for the top spot. It was nowhere near as competitive as the Reader side, but it was still a fun battle. The Top 3 changed around a few times early on before the ultimate Top 3 settled into their positions and held on until voting ended.

Zendaya is a well-known actress who has graced our screens for well over a decade proving herself an extremely gifted performer. Her turn as Rue in Euphoria changed the trajectory of her career allowing audiences to see just how far her immense range stretches. Season 2 in particular was an intense season permitting Zendaya many great opportunities to shine. We could look at the highlights from each episode, but as the lead character almost every episode has a treasure trove of profound and amazing performances that are a painful gut punch. This was a season of major trials and tribulations for Rue that would challenge any performer. Each episode required a new complex level of emotional payout to deliver on the performance. She was also tasked with bringing to light the very real and devastating consequences of drug addiction in teens. Zendaya not only had to showcase the horrific consequences drug addiction has on the individual, but also portray how Rue processed the harm she was causing those she cares about through her actions. Perhaps most importantly she gave a stunning performance in Stand Still Like the Hummingbird (2×5) where she had to deliver Rue to rock bottom before starting the arduous journey of clawing Rue back to the surface and reconciling with those that had gotten caught up in the wake of her addiction. Every episode of Euphoria that aired in 2022 built on the one before it showing that Zendaya is an actress that can do just about anything thrown at her and do it with a level of precision well beyond her years. Zendaya is SpoilerTV’s 2022 Staff Choice Performer of the Year. 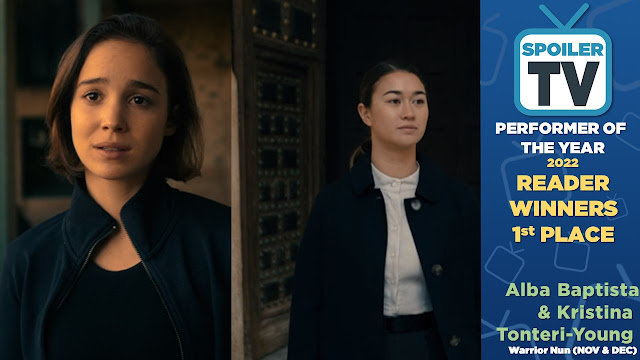 Ties are hard to come by since these polls have blind results yet here we are with a tied result. We have only had one single POTY tie in the 7-year history of this feature, so there is a precedent set, but most of us thought we’d never see another POTY tie again. We have had maybe three or so ties over the years during the regular monthly rounds. This year during the September round was also the first time we ever had co-stars share a tie-win. That’s all to say that the fact this contest ended not just in a tie, but a tie involving co-stars is extraordinary. What perhaps makes this all the more extraordinary was the sheer volume of votes making the odds of a tie even more unimaginable. This was a full-on battle that saw Alba Baptista and Kristina Tonteri-Young repeatedly tie before one would take the lead then a short while later they would tie again and the other person would then take the lead. It just so happens that just as voting ended the gap closed once again and they ended up locked in a tie result. The pressure was on them since fellow Netflix outcast Sarah Catherine Hook from First Kill surged the last day and was nipping right at their heels constantly threatening to overtake them. The Warrior Nun fandom was very obviously divided in regard to which of the stars to support and if voting had gone on just a tiny bit longer it is very likely Hook would have overtaken them. As it was, Danielle Savre, the 2021 Readers’ Choice Performer of the Year, fell prey to the amazing organization of the First Kill fans as she had long held that second-place spot before she was overtaken by Hook. There was clearly a statement being made given that three of the four performers who either won or landed at the top were from cancelled Netflix shows.

It is fitting that Alba Baptista and Kristina Tonteri-Young ultimately tied because when it comes to their 2022 performances on Warrior Nun it is hard to discuss one of them without the other one coming up. Their performances were so intertwined that despite both being absolute powerhouses entirely on their own they are an unstoppable pair when together. They shared a myriad of memorable and profound scenes this season that will long stick in the minds of fans of the series. Each episode had at least one moment that highlighted how well-matched they are as an acting pair. For some examples, the dance scene in Galatians 6:4-5 (2×1), the argument and reconciliation in Colossians 3:9-10 (2×2), Ava carrying the drugged Beatrice through the streets of Madrid in Luke 8:17 (2×3), their reunion and the joint fight scene in Corinthians 10:20-21 (2×4), Ava coming back to life in Beatrice’s arms in Mark 10:45 (2×5), Beatrice saving Ava in Isaiah 40:31 (2×6), the heartbreaking discussion regarding Beatrice running away with Ava in Psalms 116:15 (2×7), and basically every scene they shared in Jeremiah 29:13 (2×8). But, to be clear, these were just some highlights, each episode was filled to the brim with moments where they brought their absolute best to their individual and joint performances.

Given their level of near unparalleled onscreen chemistry they easily sold the fledgling love story that was brewing throughout both seasons even going so far as to add in little improved actions that really helped lock in the deep emotions fueling each character. Baptista and Tonteri-Young knew the responsibility they held in their very capable hands to do justice to this unique and complex relationship that encompassed their characters and their hard work paid off. Baptista made the audience believe how deeply Ava loves Beatrice not just via words, but actions. When it came time for Ava to sacrifice herself for the greater good it was very clear through Baptista’s performance that Beatrice’s influence and Ava’s love for Beatrice were her driving forces. Baptista made the audience feel Ava’s love for Beatrice long before their first kiss and love confession in the season finale. Tonteri-Young had the tricky task of showing how deeply Beatrice was falling for Ava without allowing Beatrice to fully accept and reciprocate the love until it was basically too late. She had to constantly show Beatrice’s battle between a lifetime of being told what she felt for women was wrong while subsequently falling in love with her best friend. Both actresses sold their side of the story in such a profound way that when everything converged in the season finale the emotional impact was overwhelming. Without each giving their all throughout the entire season the payoff wouldn’t have been near as impactful. The thing is, while the love story is a big part of the characters, it isn’t the only thing they had to contend with in their performances. They beautifully delivered the love story while also conveying how much responsibility each character was shouldering in trying to save the world from an evil being. These characters literally have the fate of the world resting on their shoulders and that was always kept front and center in the performances. All of these elements combined made a compelling argument for them to each hold this title and the fact they get to share it is in many ways poetic. Hopefully, Warrior Nun will find a new home allowing them more time to shine as these characters. Alba Baptista and Kristina Tonteri-Young are SpoilerTV’s 2022 Readers’ Choice Performers of the Year.

Please join us in the comments and on social media in celebrating Zendaya, Alba Baptista, and Kristina Tonteri-Young as well as their amazing fellow 2022 monthly winners.

Come back to SpoilerTV on Wednesday, February 1st at 6 pm ET for the start of the January round.

7 Ways to Make Money on Your Phone

All American – Feel So Good

The Minimum Wage in Every State in 2023

There will be only one version of Google’s Pixel…