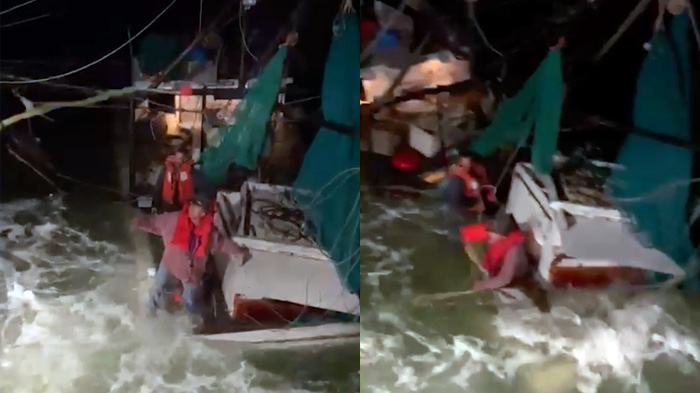 ENGELHARD, N.C. (WNCN) — The crew of a sinking fishing ship was saved in a wild rescue as their vessel sank and broke apart in the darkness early Friday at the North Carolina coast, according to the U.S. Coast Guard.

The incident was reported around 2 a.m. Friday about file miles from Engelhard in the Pamlico Sound, according to a news release from the Coast Guard.

The crew of the 35-foot fishing vessel, which was named Heathers Breeze, reported the ship was sinking.

A Hatteras Inlet Coast Guard boat responded and gave the crew a pump to help slow the sinking.

About 10 minutes after the crew was taught how to use the pump, the ship kept sinking. The ship quickly went underwater and broke apart, video showed.

Two crew members jumped from the ship while grabbing a rope just as the ship sank beneath them. Both were later pulled from the water with no injuries.

Photos from the U.S. Coast Guard showed the ship taking on water and video showed the rescue of the crew who swam to a nearby boat.